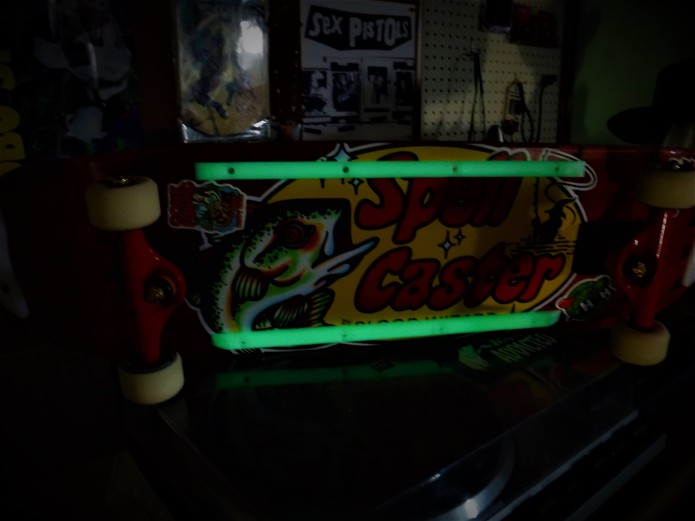 I’m still working on getting everything together for the official launch of my skate company. It’s taking some time, but I’m patient. I’ll just keep at my other projects and keep skating in the garage until it all clicks. Well, maybe I’ll let my toe heal a bit first. Broke it the other day. Anyways, I’ll let you go (whoever you are). Hope you’re doing well.

P.S. The new deck I got from Blood Wizard looks pretty nice with those glowing rails.

Blind spot hides me from your sight

In the corner of your eye

I skitter out of view

Curious creature, I live for the pursuit

Amused, you leave me to my game

Holding to the undergrowth, keeping distance all the same

Keeping quiet ’til there’s no one left to tell

Turn of the century

A millennia come to pass

I am an artifact

A remnant of the last

Out of place in either

A man out of time

Old soul suspended on a wire

Hung up on reality, despite my ceaseless wishing

I hesitate, eyes fixed on the empty page

My eyes cast within

Searching for a muse in muted oblivion

Plume of my essence

Smoke to pierce the heavens

Rend the lungs of the witness

Above me, dark clouds crowd the skyline

Eyes scan the edges, no silver to find

Sure signs of a storm

Complex in its’ form

If you’ve ever had your fifteen minuets of fame, you might agree that it really does feel like the briefest of moments, whether it was out in the real world or online. I’ve had finite experiences in both worlds, finding that I ultimately don’t like an overabundance of attention, positive or not. In fact, I’ve never been so uncomfortable as I was when I attended an upscale fashion show in Toronto, Ontario. It was hosted in some fancy hall, within a large hotel. The main area was populated by representatives from firms spanning the known world of fashion; names such as Hilfiger, Ralph Lauren and so on. I had arrived at this event without any prior planning, taking up a “plus one” offer at the last moment. I was dressed in torn off denim shorts, worn over my plaid pajama pants, with an early era, black bear lined leather trench coat from the Sears Men’s line over a ratty hoodie, topped with a toque I had studded. Every designer approached me by the end of the night, asking who I was representing. Each took a long, incredulous look at me when I told them “Nobody. I just dress this way.”. I think it’s the most direct attention I’ve ever received in the real world, aside from a couple public speaking engagements that I half assed and the time some restaurant owner mistook me for being in “Ill Scarlet”, whoever that is. I prefer poetry, as I doubt more than a couple hundred people will ever express interest at any one time. It’s also harder for people to criticize poetry, which is comforting. I wouldn’t mind another free burger though…. If for whatever reason you’ve read this entire ramble, I apologize. There really wasn’t any specific point.

P.S. That jacket fell apart years ago, but I saved the patches for my jean jacket. It’s hand stitched and it was won as part of the prize at the very first “Guess Jeans Invitational Rodeo” by my father, a former Rookie of the Year and certified professional bull rider. Its’ style model is one and it’s among the first jackets that Guess ever made (possibly the first produced).

I received a message from a relatively small group on Deviant Art. I’ve been asked for permission to have a poem of mine read for a series of videos hosted on Youtube. I’ve decided to give the go ahead. It’s admittedly flattering that there is any degree of interest in my work beyond those who enjoy reading poetry in private. I’ve considered doing readings of my material on Youtube, but I’ve never followed through. If this goes well enough, I may finally start my poetry “vlog”.

I dearly hope that by this point you’ve stopped reading, as I’m merely rambling. It’s much less entertaining when I’m not doing it in rhyme. Here’s the group I mentioned. You like poetry, right? http://thewritergang.deviantart.com/

I often slip away and hide myself from life

Wandering so aimlessly, in and out of sight

No light to guide the way

Ever called “The Stray”

Always somewhere in between

The life of a Wanderer is lonely, though not hopeless

I may be lost in my own world, but I hold no delusions